Factoring – A Longer History Than You May Realize 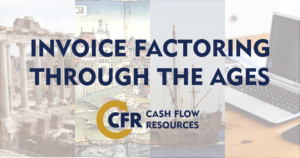 Have you ever wondered how financing worked throughout history? It turns out that civilizations used methods similar to some forms of financing we use today.

One of the common questions that we hear from our clients time and time again is if factoring is a new thing and if it is a safe form of financing.  What we can tell you is that it absolutely is and that it has been around for a long time.  As a new business, factoring allows you to finance your invoices when you may need freedom that a banker does not provide.  In this blog, we will take a look at the history of factoring to provide a bit of an assurance that this has been around a long time and it may be ideal for your business.

The most basic and earliest invoice factoring can be traced back to Northern Africa and the Middle East. To that end, invoice factoring rules were found in the Code of Hammurabi, which was the area’s law code at the time.

As it happens, we know more about factoring as it was present and prevalent in the Roman Empire between 31 B.C. and 476 A.D. At that time, the “factor” had a role similar to factors of today. Factoring mainly was used for agriculture and businesses that may have had a “lean” season or when the weather made the crop scarce.

Modern factoring started in the 1300s and evolved due to the need for innovative financing. During this time, many groups were persecuted in areas of Europe and as a result certain groups who were not allowed to own land still could sell grains and crops. In order to do this, merchant bankers would give loans out against these farmers’ crops. It was risky, to say the least – especially since farming was much less of a guaranteed result.  Eventually, the practice evolved and the bankers began advancing the money and collecting it upon payment from grain shipped abroad, of course with a fee.

Factoring in The New World

Factoring is actually one of the reasons that America was successful. The Pilgrims even financed the Mayflower and their journey to the continent with invoice factoring!

By this time, the practice of factoring was common. The East India Company and the Hudson Bay Trading Company utilized invoice factoring. Due to the distance and time it would take for early Americans to get materials from England and ship them back, London bankers would advance funds to colonists for the materials they needed. The factor would pay a discounted rate to the seller before the voyage then when the goods arrived at their destination, withheld a percentage and the money that was owed was collected.

The late 90s and early 2000s added another way to factor – the internet. The process became faster and instead of banks providing the service, niche factoring companies, like CFR emerged. Additionally, the internet allowed businesses to obtain their cash a lot faster. Instead of waiting weeks for an advance, payments could be made in as little as 24 hours!

No matter when you look at factoring through history, the basis is helping businesses succeed no matter their cash flow situation. At CFR, we work with you to develop the best course of action and provide flexibility so you only factor the invoices you want when you want!